I am continually amazed that THIS person is actually our president. 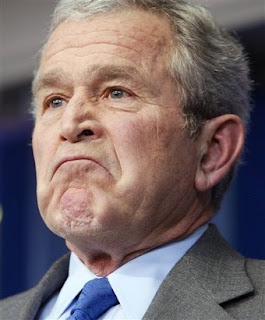 George W. Bush continually does and says things that just astound me. How this person actually got to be where he is has got to be one of the more mysterious and amazing political stories ever. He is so tone deaf to the goings on around him on just about everything, it is amazing. But this latest one, in front of troops serving in Afghanistan, really had me ready to bit through nails. Via Digby:

I must say, I'm a little envious. If I were slightly younger and not employed here, I think it would be a fantastic experience to be on the front lines of helping this young democracy succeed. It must be exciting for you … in some ways romantic, in some ways, you know, confronting danger. You're really making history, and thanks.


Serving in a war, on probably their second, third or fourth deployment, in a hostile environment, away from their families for the last year, never knowing when you might get shot at or blown up, and our PRESIDENT calls this a “FANTASTIC EXPERIENCE”?!? “ROMANTIC”?!? And this is the guy who joined the Texas Air National Guard, with the help of Daddy’s connections, so he wouldn’t have to go to Vietnam, and who, to this day, can’t prove that he actually served his required time in Alabama.

This is beyond being “in a bubble”. These are the utterings of complete buffoon, one with some very serious emotional problems that are in need of therapy. How could anyone possibly say that to these troops, much less the person who is responsible for sending them there? How much without a clue can a single person be?

I do know that if a Democrat had said something like that, the chickenhawks would be screaming for his or her scalp, and this would be THE major story for the next few weeks. There would be calls for resignation. But, this is George Bush, our “glorious leader, the War President”. And, as everyone knows (everyone who is paying attention, anyway), It’s O.K. If You Are A Republican.
Posted by zeppo at 7:42 AM