Sarah Palin has apparently gone completely off the deep end! 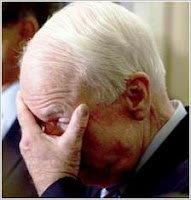 Yeah, I know that, in politics, hyperbole on the campaign trail is to be expected, and you really need to paint your opponent in the most unflattering light possible. But, you know, it seems that if such as strategy is to be effective, it needs to be at least somewhat plausible. This... This is just ridiculous.

"See, under a big government, more tax agenda, what you thought was yours would really start belonging to somebody else, to everybody else. If you thought your income, your property, your inventory, your investments were, were yours, they would really collectively belong to everybody. Obama, Barack Obama has an ideological commitment to higher taxes, and I say this based on his record... Higher taxes, more government, misusing the power to tax leads to government moving into the role of some believing that government then has to take care of us. And government kind of moving into the role as the other half of our family, making decisions for us. Now, they do this in other countries where the people are not free. Let us fight for what is right. John McCain and I, we will put our trust in you."

She has made that “next step” in the progression of accusations; from wanting to “redistribute YOUR wealth” to “socialist”, directly now to “communist”. “Barack Obama is going to gather up YOUR income, YOUR property, YOUR television set, YOUR pickup truck with the gun rack in the rear window, and give it all to someone else! You will be left with nothing!” That seems to be what Sarah Palin is saying in the above quote.

Communist? Communist!?!? The strategy that the Republicans seem to have settled on these days involve using plays from the 1930 playbook about race and the 1950 playbook about the Great Red Scare. They may be really stoking the fires that burn within the hardcore 35% that will always go with whatever wingnuttery they hear, so long as it accuses a Democrat of something they don’t like. But winning over any undecideds that remain? I am pretty dubious. To me, this makes Palin look like one of the screaming Blue Meanies.

I really did enjoy this story from the Daily Telegraph in the U.K. It appears that some Republican strategists are much more willing to talk to an English daily than an American one, in some pretty upfront terms. I’m not resting easily until this is over, but boy, if all the Republican insiders can do is worry about the Democrats not having the 60-40 super-majority in the Senate, this is all looking really good.

It can’t happen to a more deserving bunch of people.
Posted by zeppo at 8:03 AM