Conservatives really need an Ogre to vilify, it seems, to give their lives meaning. 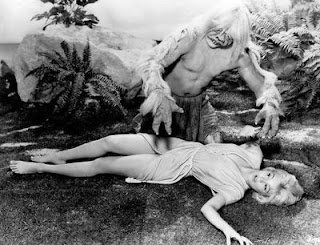 It seems to me as if conservatives in this country cannot function without an enemy in sight, on whom they can focus their angry and hatred. The last few decades, it has been “liberals”, Democrats, Hollywood elitists, anti-war protestors, “abortionists”, whomever. Gays, lesbians and people of color make the Ogre list quite a bit as well. During the Vietnam war era, it was hippies and the “counter-culture”. Before that, it was the Communists, both real and imagined. Joseph McCarthy played that card very well indeed.

However, the luster seems to have come off the conservatives favorite Ogres of late. Oh, they aren’t completely gone. People like Rush Limbaugh and Bill O’Reilly really don’t know any other tune. That’s all they have, so they will continually trot out the old boogiemen, liberals and Democrats, to keep their listening audience angry. But right now, it just doesn’t seem to be working for them as well as it used to. It probably has something to do with the fact that Republicans had total control of two of the three branches of government for the last six years, and moderate control over the judiciary. And see how well things have been working? It becomes really hard to blame liberals and Democrats for every ill in this country when the Republicans were doing everything they possible could to marginalize and shut out the Democrats from even minimal participation in our government. The same thing goes for the Iraq war and the ridiculously named GWOT (Global War on Terror). That doesn’t seem to be going very well, and again, it is very difficult to blame the Dems for that. Oh, every once in a while, someone tries, but it isn’t sticking. The preferred alternative to blaming someone else is to not talk about it. One recent study showed that Fox News, that bastion of right-wing warmongering, now only sporadically mentions the war in Iraq, much less than either CNN or MSNBC does. That certainly wasn’t the case in the prelude to the war.

Therefore, what’s a good conservative to do? All their usual targets have gone away, due to the fact that conservatives are really starting to look seriously stupid when they try to blame things on someone else that they, themselves, are responsible for. So, it is now the time to change the subject. And not only is a change of subject needed, the new subject needs to be one that includes a new Ogre on which the conservatives can focus their anger and hatred. That is my reading of the rather recent explosion in the “debate” over immigration.

Now, I am not going to argue that immigration, and specifically illegal immigrants, isn’t a problem. It is, and it is going to take a lot of ingenuity and compromise by everyone involved to come up with a workable solution. (My personal take is that building a fence across the entire length of the Mexican/American border not only is not going to work, it is a seriously moronic idea on top of that.) However, that is not how I see this debate being used by the professional agitators in the conservative ranks. Yes, much of this outpouring of raw emotion IS genuine. However, much of it is also very calculated. It is used to distract attention from those other areas that don’t seem to present very good targets these days. What better target than people who are in the country, taking “American jobs”, and don’t look exactly like them or even speak the same language. Yes, illegal immigrants make for a perfect Ogre. Thus, the ratcheting up of this subject we have seen over the last year. Two years ago, this subject seemed to not be on anyone’s radar screen. I certainly don’t remember much discussion about it. Now, depending on who you listen to (such as the aforementioned O’Reilly or CNN’s Lou Dobbs), this is the overwhelming issue of our time.

Fear of the “outsider”, intent on destroying everything conservatives hold dear, seems to be the overwhelming factor in choosing a good Ogre. The Ogre, to be really effective, must instill fear in the hearts of each and every True American Patriot. However, the Ogre must also represent a rather intractable problem, as the Ogre, to be truly effective, must be able to be used over and over again, to repeatedly bash Democrats and liberals over the head with it. Therefore, the Ogre must be such that it is acceptable to those in power to actually never address! Nothing terrible must happen to the country if the Ogre never goes away.

If the Republicans really and truly wanted to address this issue, they would go after the American companies who readily employ non-citizens who are in the country illegally. However, that would totally upset the apple cart for the other wing of the Republican party, the Pro-Big-Business wing. They will not tolerate any effort to limit their pool of workers who are ready and willing to work at whatever job is offered, at lower than normal wages with no benefits. That would undercut their profit margin and therefore undermine their entire business model. Yet, this uncomfortable fact is not dissuading the very passionate conservative base who, for whatever reasons of their own they might have, from pushing immigration as the new Ogre.

That is my take on the current hysteria over immigration.
Posted by zeppo at 4:38 PM