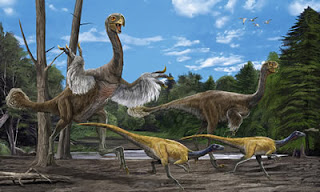 Well, this is rather cool. Dinosaur people (people who study dinosaurs, not… well, you know) have long suspected that we are only familiar with less than 5% of the types of dinosaurs that ever lived. For example, everyone knows about the Tyrannosaurus rex, one of the most famous of all dinosaurs that every lived, correct? King of the Dinosaurs and all that? There are only about 30 known fossilized skeletons of T. rex in the entire world. Given how many of those that ever lived over the millions of years that they did, 30 is not a very statistically significant number. It wouldn’t be a surprise, based on this number, if mankind is totally ignorant about many other kinds of very significant dinosaurs. It is therefore always very interesting when a new one pops up. And this one looks to be very interesting. From an article in Nature:

Alive, the beast is thought to have been 8 metres long, 3.5 metres high at the hip and 1,400 kilograms in weight — 35 times as heavy as its next largest family members and 300 times the size of smaller ones such as Caudiperyx. It has been classified as a new species and genus: Gigantoraptor erlianensis. The find is detailed this week in Nature.1

The evolution of bird-like features had long been thought to be accompanied by a decrease in size, meaning the smaller the species, the more bird-like it is likely to be and vice versa. The new discovery shows that isn't necessarily true.

Gigantoraptor had long arms, bird-like legs, a toothless jaw, and probably a beak. There are no clear signs as to whether it was feathered. However, judging from its close affinity to other dinosaurs known to have been feathered, Xing Xu of the Institute of Vertebrate Paleontology and Paleoanthropology in Beijing speculates that it was.

“This is a dinosaur group we've known about for a hundred years. They are usually the size of a turkey or maybe an emu," says David Unwin, a dinosaur expert at the University of Leicester, UK. "No one would have predicted this. If they had, they'd be laughed at."


Now, discovery of something like this always throws our current theories for a loop. As the article in Nature notes, this discovery is such a surprise due to the fact that people in the business of trying to determine the evolutionary path of bird-like dinosaurs never expected anything of this size. For a bird-like dinosaur, this one is gigantic. And because researchers think that this one was a young adult and not fully grown, the adults of this particular species may be even larger. Most theorists in this area had thought that the bird-like dinosaurs were much smaller and continued on downward to get to the final configurations that birds have today.

This is what makes science exciting. New discoveries cannot just be ignored or explained away as just some unimportant aberration. Well, a person can try, but since everything is checked, double-checked and triple-checked by your very educated and experienced peers, any attempt at blowing smoke is quickly exposed as just that. Currently held theories, even very well established ones, must be adjusted in order to account for the new data. That is what is meant by evolution being “a theory”. It most certainly does not mean that the new data (like a giant bird dinosaur with a beak) totally invalidates the entire model, which is what many fundamentalist Christians would like you to believe. It does mean, however, that the current theories are in need of adjusting. Sometimes, these adjustments are just tweaks, sometimes they require a major scrapping of all currently held beliefs and essentially starting over. This last category doesn’t happen too often. An Einstein doesn’t come along everyday to displace an Isaac Newton, or Galileo dispose Ptolemy. Usually, the tweaks are more subtle than that.

Scientific theories are not some static, dry litany of facts and figures. They are constantly being updated and refined as more and more knowledgeable people contribute to the theory. It is very much a vibrant and energetic process.

Sixteen foot tall bird-like dinosaurs with beaks and possibly feathers… Seeing one of those, up close, must have been truly amazing.

Right before it ate you, of course.
Posted by zeppo at 6:20 AM