The wit and wisdom of the X-Files, as it applies to the administration of George W. Bush 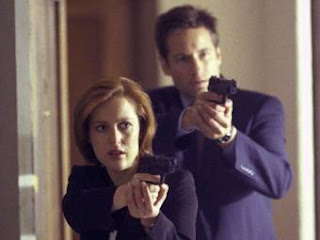 
Scully: I was raised to believe that God has his reasons, however mysterious.
Mulder: He may well have is reasons but he seems to use a lot of psychotics to carry out his job orders.

Mulder: All the nuts roll down to Florida.

Susanne Modeski: [to The Lone Gunmen] No matter how paranoid you are, you're not paranoid enough.

Scully: I'm afraid that God is speaking and no one is listening.

Scully: I hate to say this Mulder, but I think you just lost your credibility.

Krycek: Scully's a problem. A much larger problem than you described.
The Cigarette Smoking Man: Every problem has a solution.

Mulder: Fear. It's the oldest tool of power. If you're distracted by the fear of those around you, it keeps you from seeing the actions of those above.

Mulder: You know, they say when you talk to God it's prayers, but when God talks to you it's schizophrenia.

Stonecypher: Have you ever been to a team seminar, Agent Mulder?
Mulder: No, unfortunately around this time of year I usually develop a severe hemorrhoidal condition.
Posted by zeppo at 4:55 PM