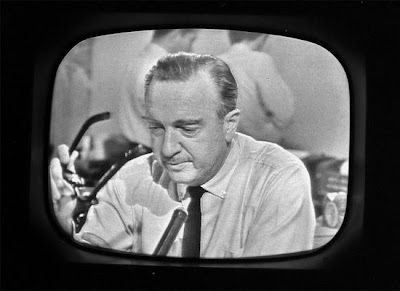 Walter Cronkite has died at 92. This man lived an extraordinary life and was a journalist in every sense of the word. We do not have anyone comparable today in broadcast journalism. I am old enough to remember watching him on television giving us the bad news about John F Kennedy and the Vietnam War. However, my most vivid memory is watching the coverage of Apollo 11, which was just 40 years ago this past week. I just remember the thrill in his voice during the liftoff. I can't remember his exact words, but they were something to the effect of "Man is on the way to the moon!" HIs excitement was very real and was immediately transmitted to his viewing audience. He was held in such esteem that LBJ said something like "If we have lost Cronkite, then we have lost the country" when speaking about support for the Vietnam War.

This guy was a giant. It's too much to wish that we had some Cronkites around today. I would be satisfied with some of today's journalists stopping and reflecting on how journalists should go about their job.

I wrote this original post immediately after seeing the sad news of Cronkite’s passing on HuffPo. I have seen, since that time, there are many posts about Cronkite on blogs large and small. Mad Mike’s America has a very good one. So does Glenn Greenwald, although the majority of the post is not so much about Cronkite but about the passing of true journalism. Here are a few samplings.

"The Vietcong did not win by a knockout [in the Tet Offensive], but neither did we. The referees of history may make it a draw. . . . We have been too often disappointed by the optimism of the American leaders, both in Vietnam and Washington, to have faith any longer in the silver linings they find in the darkest clouds. . . .

"For it seems now more certain than ever that the bloody experience of Vietnam is to end in a stalemate. . . . To say that we are closer to victory today is to believe, in the face of the evidence, the optimists who have been wrong in the past" -- Walter Cronkite, CBS Evening News, February 27, 1968.

When Pulitzer Prize-winning journalist David Halberstam died, media stars everywhere commemorated his death as though he were one of them -- as though they do what he did -- even though he had nothing but bottomless, intense disdain for everything they do. As he put it in a 2005 speech to students at the Columbia School of Journalism: "the better you do your job, often going against conventional mores, the less popular you are likely to be . . . . By and large, the more famous you are, the less of a journalist you are."

In that same speech, Halberstam cited as the "proudest moment" of his career a bitter argument he had in 1963 with U.S. Generals in Vietnam, by which point, as a young reporter, he was already considered an "enemy" of the Kennedy White House for routinely contradicting the White House's claims about the war (the President himself asked his editor to pull Halberstam from reporting on Vietnam). During that conflict, he stood up to a General in a Press Conference in Saigon who was attempting to intimidate him for having actively doubted and aggressively investigated military claims, rather than taking and repeating them at face value:

Picture if you will rather small room, about the size of a classroom, with about 10 or 12 reporters there in the center of the room. And in the back, and outside, some 40 military officers, all of them big time brass. It was clearly an attempt to intimidate us.

General Stilwell tried to take the intimidation a step further. He began by saying that Neil and I had bothered General Harkins and Ambassador Lodge and other VIPs, and we were not to do it again. Period.

And I stood up, my heart beating wildly -- and told him that we were not his corporals or privates, that we worked for The New York Times and UP and AP and Newsweek, not for the Department of Defense.

I said that we knew that 30 American helicopters and perhaps 150 American soldiers had gone into battle, and the American people had a right to know what happened. I went on to say that we would continue to press to go on missions and call Ambassador Lodge and General Harkins, but he could, if he chose, write to our editors telling them that we were being too aggressive, and were pushing much too hard to go into battle. That was certainly his right.

Can anyone imagine any big media stars -- who swoon in reverence both to political power and especially military authority -- defying military instructions that way, let alone being proud of it? Halberstam certainly couldn't imagine any of them doing it, which is why, in 1999, he wrote:

Obviously, it should be a brilliant moment in American journalism, a time of a genuine flowering of a journalistic culture . . .

But the reverse is true. Those to whom the most is given, the executives of our three networks, have steadily moved away from their greatest responsibilities, which is using their news departments to tell the American people complicated truths, not only about their own country, but about the world around us. . . .

Somewhere in there, gradually, but systematically, there has been an abdication of responsibility within the profession, most particularly in the networks. . . . So, if we look at the media today, we ought to be aware not just of what we are getting, but what we are not getting; the difference between what is authentic and what is inauthentic in contemporary American life and in the world, with a warning that in this celebrity culture, the forces of the inauthentic are becoming more powerful all the time.

Glenn also spends some time about how the current crop of media stars fawned over Tim Russert when he passed away. Pfft. I’m sorry the guy had a heart attack and died. But Russert was no journalist. He was a compliant tool of the rich and powerful, which usually meant the Bush Adminstration and the Republican Party. If he had done his job and pushed back when he was obviously being fed a lot of horse hockey, maybe the country wouldn’t be in the position it is. And make no mistake about this. I don’t think the press should be a sycophant of ANY administration, Republican or Democratic. I have no illusions about the Democratic Party. It’s just that I think they have a little bit more in the way of principles and are looking out for the country far more than the Republican Party. But I also know this isn’t always going to be the case.

Bottom line, the press needs to do its damn job. However, with big money controlling pretty much every facet of mass media, I don’t really see this happening without a huge upheaval somewhere. Perhaps the internet and independent bloggers are the beginnings of this upheaval. I know that many people either already believe it is so or fervently hope that it is so.
Posted by zeppo at 7:27 AM