THIS is one reason that many think our current policy on guns is insane. 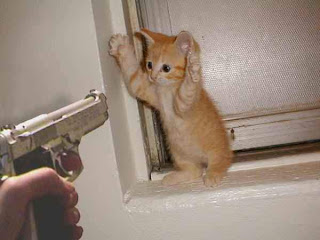 (I have the distinct feeling that I am going to annoy a number of people with this post. Talking about guns and gun control is about as risky as talking about religion, if you don’t know your audience. There are some very strong feelings on all sides of this discussion. However, I guess the point of writing on a blog is to say what you think. And, of course, having a blog means never having to say you’re sorry.)

From the Seattle PI:

TWISP, Wash. -- A sound engineer who worked on live performances by the likes of B.B. King, Nirvana and Alice Cooper has been shot to death at a motel in Twisp, Wash.

Tom Pfaeffle, 49, staying with his wife on vacation at the Blue Spruce Motel, apparently put his room key into the wrong door Friday night and was hit in the upper chest by a bullet fired through the closed door, Police Chief Rick Balam told KING Television of Seattle.

A second shot went through a wall into another room and landed harmlessly on a guest who was doing a crossword puzzle in bed, motel owner Randy Martin told The Wenatchee World newspaper.

A 57-year-old man surrendered without further incident and was jailed for investigation of second-degree murder and assault, Balam said.

I've been to Twisp. It's a very small town and it is very frightening to see this.

It seems to me that, by arguing greater and more lenient access to guns, gun rights advocates never make the concession that their some (not “all”, by any means and not even “most”, but certainly “some”) of gun rights advocates are also trigger-happy hotheads that support open ownership of guns because of the feelings of power and control it gives them. “Don’t screw with me! I’m armed!”

I have seen this up close and personal. I usually don’t go into too many personal details in this blog. That isn’t its purpose. But I think this time, I have some relevant personal information. When I was in my early 20’s, I guess it was, my younger brother and I were confronted by my stepfather, who was always angry and blamed everyone else for his supposed problems. He was very drunk, as usual, but this time he had a loaded pistol, which was decidedly unusual, that he kept waving in our direction. He would check that it was loaded every so often, either to reassure himself or to intimidate us, which is more likely. He kept waving this gun at us and demanding that we “love him!” Yeah, threatening someone with a loaded gun is a sure fire way to get someone’s love and admiration. We just kept him talking until he eventually passed out on the kitchen floor. We then hid the gun somewhere. During this episode, I really couldn’t believe it was happening. Thinking about it afterwards, I felt decidedly fortunate for my brother and me to have come out of the episode uninjured and alive.

That’s the mindset I see out there. Those are the people who desire that the entire population be armed; the kind of people who think the problem with our society is that we don’t have enough threats of violence and intimidation and general, overall high levels of testosterone. I would guess, but am not certain, of course, that this is the kind of guy who fired his gun through his locked door of his motel room at someone who was mistakenly trying to open the wrong door. I have done that myself. I guess I should count myself as being lucky I survived.

I have absolutely no hope that anything will change here in the U.S. Too much money, too much intimidation, too many people thinking about themselves and not about what else is really going on in the country, for anything to really change. “Those damn Democrats better not try to take my guns!” That’s the mindset, and no politician is going to pick that fight. It’s better to coddle up to the gun lobby and gun ownership supporters than try to perhaps do something intelligent.

I suppose the only lesson learned from this story is that you better be very sure what hotel room you are in before you start trying to open the door.
Posted by zeppo at 7:12 AM