Yet ANOTHER reason to hate the New York Yankees. 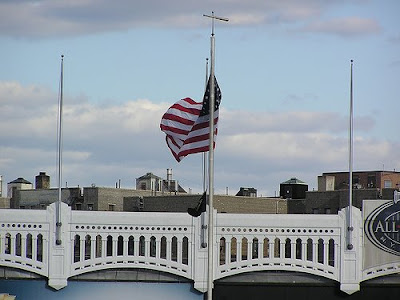 They have security people who won’t let you go pee during the singing of “God Bless America.” From Whiskeyfire:

Two uniformed cops who ejected a Red Sox fan from Yankee Stadium last summer when he tried to use the bathroom during "God Bless America" have cost NYC taxpayers some $20,000 in settlement money. But the good news is that Yankee Stadium will now allow attendees relieve themselves during the Seventh Inning stretch! You'll recall that last August, one Brad Campeau-Laurion refused to obey an NYPD officer who ordered him back to his seat when he tried to use the bathroom as "God Bless America" played. According to Campeau-Laurion, two officers then forcefully threw him out, with one of the officers telling him to "leave the country if he didn’t like it." In the wake of 9/11, Yankee stadium began requiring spectators to remain in their seats during patriotic songs, in some cases extending chains to block the ends of the aisles. But after a lawsuit filed by the NYCLU over "enforced patriotism," a settlement was reached yesterday whereby Campeau-Laurion gets $10,001 from the city, the NYCLU gets $12,000 for legal fees, and baseball fans are granted the liberty to micturate at will.

“Extending chains to block the ends of the aisles”?!? You have to be sh*ttin me.

Enforced patriotism = fascism, in my mind. No one is going to make me sing a crappy, simpering song if I don’t want to, just as no one is going to force me to say the Pledge of Allegiance if I don’t feel like it. And for some reason, I find it even more upsetting that this wasn’t a government entity trying to enforce this, it is a professional sports team!