History always repeats itself, it seems, especially when actual people are involved. 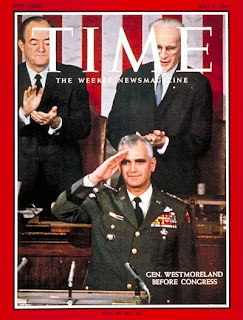 Glenn Greenwald, at Salon.com, had a commenter who dug out some pretty interesting quotes about the Vietnam War, as reported by Time magazine. And, I am assuming we all remember how that particular foray turned out.

This really isn’t so much of a short history lesson as it is a lesson in human psychology.


Time Magazine, Friday, May 17, 1963:
How is the war actually going? Measured against the desperate situation that faced General Maxwell Taylor on a fact-finding mission for the President 19 months ago, there is room for qualified optimism. When Secretary of Defense Robert McNamara returned from a conference with service chiefs in Pearl Harbor last week, the Pentagon said "the corner has definitely been turned toward victory."

No one was setting any timetable, but U.S. military chiefs and South Viet Nam's President Ngo Dinh Diem say that the war should be won "within three years." There are many soldiers in South Viet Nam who consider this wildly optimistic; some believe that the war may never be won. But almost everyone agrees that things have improved.


Time Magazine, Friday, March 31, 1967:
Nonetheless, a note of optimism permeated the conference. "There are many signs that we are at a favorable turning point," the President said at the outset. That theme was elaborated in detail as U.S. and South Vietnamese officials met on Nimitz Hill, the U.S. naval headquarters overlooking the Philippine Sea. . . .

The military situation in Viet Nam gave ample cause for confidence. South Viet Nam's Premier Nguyen Cao Ky said that the Communist forces in his country are "on the run" and pictured the supply system in the North as "in near paralysis."


Time Magazine, Friday, March 28, 1969:
"Progress" in Viet Nam is a relative and fragile thing at best. But within limits, a prognosis of progress seems more valid than at any time since the U.S. arrived.

The history of the war is all too painfully graven in false optimism. Again and again, U.S. hopes have been raised by officials armed with gleaming statistics and pollyanna rhetoric. First the U.S. "turned the corner" in Viet Nam; then there was "light at the end of the tunnel," "the enemy was on the run," and the attrition rates, the kill ratios, and all the other jargon of victory rolled on and on.

Since they have been proved wrong so often in the past, U.S. experts are careful not to parade their latest positive assessments; indeed, they almost tend to conceal them. But those currently in charge of the war in the field are convinced that "the curve is up" at last.

So, it seems like I have heard many of these same kinds of statements in the last three years about the war in Iraq. It’s pretty striking, really. Of course, you can’t really use these statements from forty years ago to actually predict what might happen in the future on a much different war involving vastly different circumstances. But, the similarities of these statements are impossible to ignore. Moreover, these statements show the tendencies of those who really have a stake in the outcome, such as politicians, top military commanders, and the compliant press to try to put the “best face possible” on something that people are really beginning to suspect may turn out very, very badly.

I will say this, though. I was only into my double digits, age-wise, and early teens during the height of the Vietnam war, so I was not wholly cognizant of what was going on a day-to-day basis. I wasn’t even certain who were the good guys, once I got past the U.S. as one of the good guys, and who were the bad guys. But I certainly never remember so many ex-generals and military types blasting away with some very public, very withering criticism of President Bush.

All in all, I say that none of this bodes very well for our chances of success in Iraq.
Posted by zeppo at 6:29 AM

Labels: government out of control, history