How you know you are in the middle of a bad day. 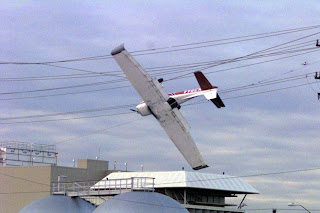 “Well, officer, there was this deer at the end of the runway when I was taking off.”

This occurred in Seattle a number of years ago. The pilot was fine, but was left hanging upside down by his seatbelt for a number of hours, waiting to be rescued. He finally was, by a large fire truck with an extension ladder. This event tied up traffic for most of the day on a well-traveled secondary highway in an industrial area. To say the least, a very bad day, but very fortunately was able to be rescued with little damage to said pilot. I don’t remember how they got the airplane down from the power lines. Unfortunately, the pilot of this airplane died in the past two years, I think, in another airplane crash. I don’t remember if he was the pilot of that airplane or not.
Posted by zeppo at 11:47 AM