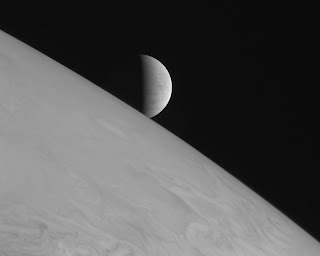 Talk about science being exciting and beautiful at the same time. This is from the New Horizons website. Isn't that just a wonderful photo?

New Horizons took this image of the icy moon Europa rising above Jupiter’s cloud tops with its Long Range Reconnaissance Imager (LORRI) at 11:48 Universal Time on February 28, 2007, six hours after the spacecraft’s closest approach to Jupiter.

The picture was one of a handful of the Jupiter system that New Horizons took primarily for artistic, rather than scientific, value. This particular scene was suggested by space enthusiast Richard Hendricks of Austin, Texas, in response to an Internet request by New Horizons scientists for evocative, artistic imaging opportunities at Jupiter.


There are many things I do not care for in our current society. However, one thing I am just truly proud to see mankind achieve is the level of understanding of the universe that we live in. There are many, many mysteries still out there, and the more we learn, the more mysterious things get. But we now know an astounding amount about the universe in which we live. Closer to home, we have sent probes to every major planet. New Horizons is scheduled to get to Pluto and its bizarre set of three moons sometime in 2013. I can’t wait to see those photos.

In the past few years, we have dune buggies running around Mars, where they have discovered conclusive evidence that Mars was once an extremely wet place. The twin rovers have returned absolutely astounding photographs that look like you took your new Nikon digital camera out to some desolate areas in Arizona. We shot a spacecraft through the gap in Saturn’s rings and dropped a probe onto Titan, Saturn’s largest moon, where we discovered weather patterns based on a methane cycle. We have taken close up photos of both a comet and an asteroid. Many asteroids, in fact, and we have actually landed/controlled crashed a space probe directly onto the surface of the asteroid Eros.

This technology is absolutely astounding, as it our curiosity that drives us to find out what we don’t currently know. We know things, today, that no one in the history of mankind has ever known or even suspected. I feel that I am extraordinarily lucky to have lived during this period of time, for that reason alone.
Posted by zeppo at 6:02 PM