Yet another rant concerning the hijacking of our American system of government. 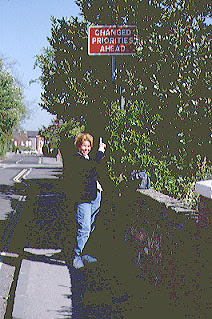 I had planned on doing some posts on some other topics besides politics, such as the planet Saturn, comparisons to The Gilded Age or why I am an atheist. However, I just can’t get my brain unwrapped enough from the train wreck that we euphemistically refer to as “our government” to be able to concentrate on and be coherent about any other subject.

I wrote a post several months ago, musing about how close we actually have come to a fascist state in America. I can’t figure out how to get the URL of a post that is more than 10 posts deep in a monthly archive. Stupid blogger. Just pick the March archive over to the right and scroll down until you see a picture of Mussolini, if you are interested. In that post, I listed everything I could think of at that time about how completely off-track this country is getting these days. There have been a couple of developments of late that has just left me awestruck about the magnitude of what Bush, Inc. is doing to this country.

The first is the huge effort of Karl Rove (that is only now really being uncovered) to make the Dept. of Justice into an arm of the Republican party. Seems like Alberto Gonzales signed a secret memo which apparently handed off all responsibility, except for a final signoff by AG, to his underlines, Kyle Sampson and Monica Goodling, both of whom are rather young and very inexperienced. And they also just happened to have very close ties to Karl Rove. And these inexperienced people were able to fire, without any apparent official justification, senior presidential appointees such as the U.S. Attorneys for the states. Just superficial study will show that the people who were fired were those seen as not loyal enough to Bush and the Republican party, and those who were retained or installed were toadies to the nth degree. It is not be absolutely proven, but all indications are that some of the U.S. Attorneys were removed because they were getting too close to Republicans in office (such as Jerry Lewis) or influential lobbyists like Abramoff, or refused to push investigations of “voter fraud” or Democrats running for office right before the election. Kyle Sampson even referred to “loyal Bushies” as part of his criteria. And, it appears that Monica Goodling as been filtering candidates for Assistant U.S. Attorneys, which are not subject to a Senate confirmation, by their political party affiliation.

Such was the power vested in these two underlings that Alberto Gonzales apparently didn’t even know why the eight (possibly more) U.S.A.s were fired. He just signed off on what he was told to sign off on. He didn’t bring up this “delegation of authority” and his secret memo authorizing such delegation to the Senate committee that questioned Gonzales, under oath, several weeks ago. He just didn’t say anything about it. Kyle Sampson, while under oath, didn’t offer up such information. Rather, he pronounced himself a “consolidator”, whatever THAT means. No one told the truth about what was going on, and felt under no compunction to offer up any truth.

To summarize, Karl Rove has largely succeeded in making the Dept. of Justice into a tool which can be used to destroy political opponents and support loyalists. No one felt any need to tell the truth to the Senate committee, even under oath. And lest we forget, someone decided to amend the “Patriot” Act such that U.S.A.s no longer need to be approved by the Senate, they can act in the position on an “interim” basis for an indefinite period. And, based on what at least one candidate, Tim Griffin (Karl Rove’s friend who was given the job of interim U.S.A. in Arkansas), was saying he expected to have the position for the remainder of Bush’s term in office, without the need for a Senate confirmation process. Fired U.S.A.’s were subject to “threatening” phone calls that sure look like an attempt at keeping them quiet about why they thought they were fired.

This is something that you expect to see in the old Soviet Union, not the United States of America, where low level party officers dedicated to “the cause” could destroy a person’s career and change the course of government just based on their judgment that the target of their wrath wasn’t sufficiently “pure”. That is Orwellian stuff, not something that you associate with the country of Thomas Jefferson.

The next thing that really got my goat is George Tenet’s tell-all book, where he basically tries to make the case that nothing that went wrong with our war in Iraq (what HASN’T gone wrong) was his fault. He always knew that the case for war based on Saddam’s weapons of mass destruction being aimed at the U.S. within the next few months or years was absolutely false. Yet, he didn’t say anything about it at the time. He wants to eat his cake (also known as “absolution”) and wants to have it (also known as the Medal of Freedom) too.

Yet, things that are apparently in his book (have not read it, don’t plan on it either) are more damning evidence that Bush, Cheney, Rumsfeld and the rest of the cabal planned on attacking Iraq as soon as they were in office. Tenet states (I’m paraphrasing from what I have read) that Iraq’s WMD’s were not the sole reason why war with Iraq was planned, or even the most important reason. He says that it was, however, the reason that could used to justify the war to the public.

Think about the enormity of that for a moment. This is what I can’t get my mind around. Bush and his minions wanted a war. They had no justification, other than they wanted to “get Saddam”. WMD’s and re-making the middle east in the image of the U.S. were rationalizations, not the primary cause. Bush has spent half a trillion of our dollars, which was originally going to be paid for by “Iraqi oil revenue”, killed over 3200 and injured over 20,000 of loyal and brave troops who believed that their leaders knew what they were doing, devastated an entire country in a conflict that has killed several hundred thousand Iraqis and left a huge raft of refugees trying to find sanctuary in an area where there is very little. And, oh yes, Bush has pretty much used up the entire world pool of goodwill toward the U.S. We are one of the most despised, most distrusted countries on the face of the earth right now.

All of this because this small group of people wanted a war with Iraq, for whatever reason. There is some fascinating stuff out there about Bush’s fixation to do his dad “one better” and to never admit any mistakes of any sort. That would be O.K. if the predictably bad results were confined to the political realm. But here, we are talking about people’s lives being destroyed. Not just the ones who have been killed, but the families they have left behind. Nothing will ever be the same again for these people, ever. And that doesn’t even start to mention the ones that have returned but with some severe psychological problems.

How could our system let this happen? What happened to our collective wisdom, judgment and moral compass? Our country is on the verge of becoming something that someone from the 1970’s would not recognize as the United States of America. This country, for the last few years, was on the verge of becoming a mirror image of the Soviet Union, but with multi-national mega-corporations and evangelical Christians at the heart of it instead of Stalinists. Most of the people of this country have been either been looking the other way at a real danger but probability uncertain of a possible terrorist attacks, were not paying any attention or were just too dumbstruck by the total audacity of this takeover of our government by radicals to even believe what was going on.

Luckily, the small percentage of people who were outspoken and courageous kept at it, and others in some position of influence have now found their voice and reason. However, our society remains a very shallow and superficial one. We are more concerned with the sexual dalliances of those in power and who is getting a 400 dollar haircut than finding out whether or not our President knowingly lied to the country in order to sell us his war-of-choice in Iraq and not going after the people who were REALLY behind the attacks of that hideous day in September of 2001. Hardly anyone, beyond a small but passionate group of progressives and liberals, seems to really care about getting that answer. I am wondering if we, as a country, are actually afraid to find that out, given what it might say about us.

The enormity of all of this is just staggering, as is the fact that Bush and his band of cronies almost got away with it.
Posted by zeppo at 6:54 AM