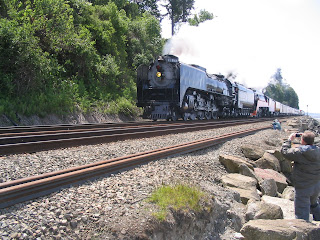 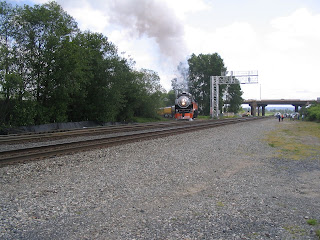 The first photo is at Mukilteo, WA May 19, 2007. Assisted by the Southern Pacific, SP 4449, the two locomotives pull an excursion train from Tacoma to Everett, WA. The tracks at Mukilteo are close to the water and run next to Lighthouse Park, and offer a very nice place to view rail operations between Seattle, Vancouver, Canada, and east over Stevens Pass on the old Great Northern route.

The second photo is at Amtrak Station Everett, WA May 19, 2007. Assisted by UP 844, Southern Pacific, SP 4449 pulls an excursion train from Tacoma to Everett, WA. While stopped at Everett, the two locomotives had changed places, as UP 844 was in the lead when I saw the train coming north at Mukilteo. The pair had a little difficulty with the grade coming around the corner from Delta Yard into the station, as both were puffing heavily and I could hear the change in frequency when the wheels lost traction with the rails and spun out for several seconds.

It's probably a little difficult to believe these days that most of this country was founded on the back of these types of trains, along with their smaller predecessors. Trains are really integral to the history of this country. Maybe I'll write a post on the great Pullman strike. It's too bad that the people who ran these early railroads were robber barons to the nth degree, and crushing people who got in their way was rather run of the mill activity for them.