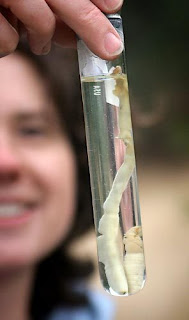 This sounds a bit like the search for the giant squid, except it involves really big worms. We know that they each exist, by the fact we have found dead versions of the animals. But catching one alive is turning out to be a very elusive quest.

COLFAX, Whitman County (Washington state) — When searching for one of North America's most elusive creatures, it helps to have state-of-the-art equipment, jokes Jodi Johnson-Maynard.

The University of Idaho soil scientist is walking up a gentle hill in southeast Washington, on a quest for the giant Palouse earthworm. In her hand is a tile spade, a narrow shovel that's about as high-tech as it gets in the worm-hunting business.

"It's our basic tool," Johnson-Maynard says, leaning on the spade like a walking stick. The long handle is great for chasing away rattlesnakes, she says, and the sharp edges slice through turf.

Unfortunately, they also make mincemeat of worms. Two years ago, a graduate student unearthed one of the rare wigglers on this same hill, but accidentally cut it in two.

"We need better methods to look for these worms," Johnson-Maynard says.

That's especially true now that conservationists are seeking endangered-species protection for the pinkish-white worms, which may grow to 3 feet long and were once abundant in the deep soils of the Palouse. Only four sightings have been confirmed in the past 30 years, and experts had feared the species was extinct.

For those of you outside the U.S. Pacific Northwest, the Palouse is the rolling hills region of Washington state that butts up to Idaho.

I also wonder about that graduate student who cut one of these beasties in half. “Hey, Professor! Um, I have some good news and some bad news! This won’t affect my grade, will it?”
Posted by zeppo at 1:52 PM