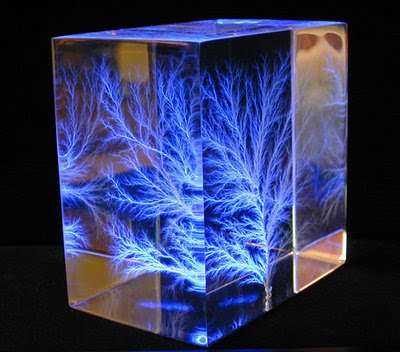 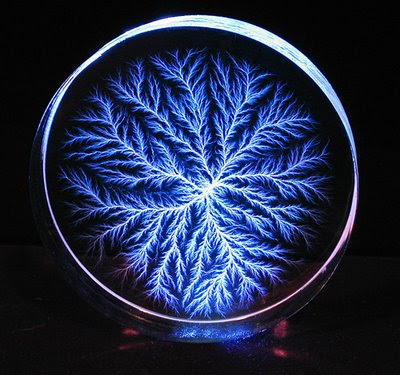 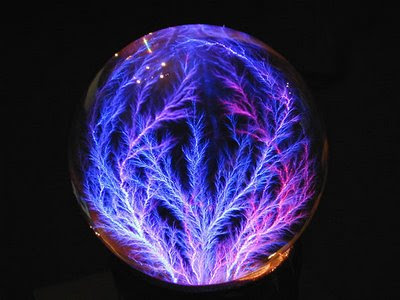 The pictures and text on this post were obtained from a very interesting blog called CrazyTopics. Unfortunately, it looks as if it has gone permanently inactive. These pictures were so interesting and unusual that I wanted to preserve them in my blog, in the event that the CrazyTopics blog page is removed.

Lichtenberg Figures are branching electric discharges (or electrical trees) that are sometimes preserved on the surface or the interior of a solid dielectric. They are named after the German physicist Georg Christoph Lichtenberg, who originally discovered and studied them.

One way that they can be produced is as follows: A sharp-pointed needle is placed perpendicular to a non-conducting plate, such as of resin, ebonite, or glass, with its point very near to or in contact with the plate, and a high voltage Leyden jar (a type of capacitor) or a static electricity generator is discharged into the needle. The electrification of the plate is now tested by sifting over it a mixture of powdered flowers of sulfur and red lead (Pb3O4 or lead tetroxide).

Modern Lichtenberg Figures can also be created within solid blocks of acrylic plastic (polymethyl methacrylate or PMMA) using a beam of electrons from a linear electron beam accelerator (or Linac, a type of particle accelerator). Inside the Linac, electrons are focused and accelerated to form a beam of high speed particles. Electrons emerging from the accelerator are moving an appreciable fraction (95 - 99+ percent) of the speed of light (relativistic velocities). The electron beam is then aimed towards an acrylic specimen. When the relativistic electrons hit the acrylic, they easily penetrate the surface, slowing down as they collide with the molecules inside the plastic, and finally coming to rest deep inside the specimen. Since acrylic is an excellent electrical insulator, the electrons inside the specimen are temporarily trapped. Under continued irradiation by the beam, the excess electrons form a plane of negative charge inside the specimen. As the charge builds, the effective voltage inside the specimen can reach millions of volts. Ultimately the huge electrical stress exceeds the dielectric strength of the plastic, causing it to suddenly become conductive in a process called dielectric breakdown.

Once breakdown occurs, branching tree or fern-like conductive channels are rapidly formed within the plastic, allowing the trapped charge to suddenly rush out in a miniature lightning-like flash and bang. Electrical breakdown of a charged specimen may also be manually triggered by poking the plastic with a pointed conductive object. The powerful electrical spark leaves thousands of permanent branching chains of fractures behind - creating a Lichtenberg figure. Although the internal charge within the specimen is negative, the actual discharge is initiated from the positively charged exterior surfaces of the specimen, and the resulting discharge actually creates a positive Lichtenberg figure within. These rare and beautiful objects are sometimes called electron trees, beam trees, or lightning trees. As the electrons rapidly decelerate inside the acrylic, they also generate powerful X-rays. These X-rays darken the acrylic by introducing defects (color centers) in a process called solarization. Solarization turns acrylic specimens an amber or brownish color, although older acrylic blends sometimes turn a lime green. The color usually fades over time, and gentle heating, combined with oxygen, accelerates the fading process.
Posted by zeppo at 9:29 AM