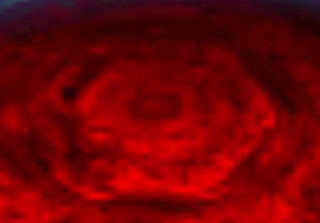 Here’s a bit of science for you, and a very odd bit at that. The picture is of a huge hexagon-shaped structure in the atmosphere of Saturn, centered on the planet’s north pole. This structure was photographed back in 1979 by Voyager, but only really got everyone’s attention after the Cassini spacecraft got some really good infrared pictures of it. This particular structure has been there for at least 25 years, and probably more.

Scientists of all persuasions are perplexed, to say the least. No one has yet come up with a plausible theory that will make a regular structure like this. One way of stating the second law of thermodynamics is that the entropy of the universe tends to a maximum. Or, a different way of stating this is that systems tend toward chaos and away from organization. Finding a long-lived hexagon in one of the wildest and windiest places in our solar system is something that fits in no current theory. It might be akin to finding a six-sided hurricane on Earth.

Science is fascinating. You never know what you might find.
Posted by zeppo at 6:31 PM