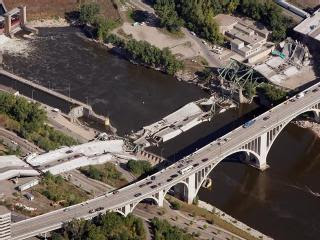 That’s what people seem to take for granted in this country. Electrical power grid. Sewage. Roads. Gasoline. Food distribution. Water..... Levees in New Orleans.... Bridges..... You know, the stuff that we blow up when we invade another country, so they can’t function properly? Or, just as likely, that people who want to do damage to a population (I am beginning to hate the word “terrorist”, it is becoming so misused) target? All the things that support our society so that it can function correctly and efficiently make up this country's infrastructure.

After the huge electrical blackout in the north-central United States that stretched all the way to New York City, everyone was up in arms about the crummy electrical power grid we have. It is aging and overburdened. Any little perturbation has the potential of knocking things down in a big way. “We must do something!” was the cry. And, predictably, nothing was done and all was forgotten until the next big emergency.

Now, after the tragic bridge collapse in Minneapolis, everyone is “very concerned” about our aging bridges and how many, many of them are categorized as “structurally deficient”. There might be some studies done, but I doubt it. The governor of Minnesota, a Republican, is talking about maybe raising the gasoline tax to fund some transportation projects, but I doubt it. In any case, 85% of highway funds come from the federal government, not the states. No, my prediction is that, once again, nothing will be done and all will be forgotten within six months. That is how we operate in this country.

We have our priorities out of whack in this country. I am not sure people even stop to consider their political positions anymore. The only thing that seems to matter are more tax cuts, mostly to the wealthiest five percent of the country, and blaming all ills, no matter what they are, on someone else. No one wants to pay for anything related to the common good anymore. Not the government, not corporations, not individuals. I don’t know how long your family automobile would keep running if you stopped changing the oil, putting air in the tires, or doing any sort of preventative maintenance. But yet, that is exactly what this country is doing to our infrastructure. We take it for granted that it is someone else’s concern and that it will always be there when WE want it to be there.

I got news for the country. It doesn’t work that way. This stuff isn’t cheap. Investments in the future must be made on a constant basis. Not every single dollar floating around should be targeted for the already deep pockets of huge corporations and their stockholders and the wealthiest Americans. Where did this mindset come from? It defies logic, but quite a lot of people now seem have bought into the fallacy that government is evil and can do nothing for anyone. If you have that mindset, that is exactly what you are going to end up with, government that does not work and doesn’t do anything for anyone. It’s a self-fulfilling prophecy.

This country needs to get its priorities in order, very quickly. We are already on the way down from our dominant position in the world after WWII. That will not last us forever. Inertia will only carry us so much further. After that, there are plenty of other countries who seem to have a much better ability to look into the future and plan accordingly.
Posted by zeppo at 6:51 AM