Solar eclipse as viewed by Hubble 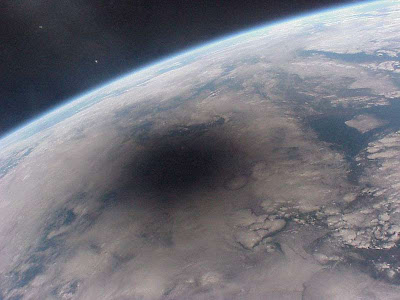 This is a pretty amazing shot of the shadow of the moon racing across the face of the Earth during a solar eclipse. Only those people in the middle of the shadow see the total eclipse. Everyone else sees a partial eclipse.

I found this shot rather reminiscent of the sequence in the sci-fi film 2010, where the monoliths on Jupiter start multiplying and end up generating so much mass that it turns Jupiter into another sun. It all started with a big black spot.
Posted by zeppo at 5:35 PM