Huh. Karl Rove to retire by the end of August. 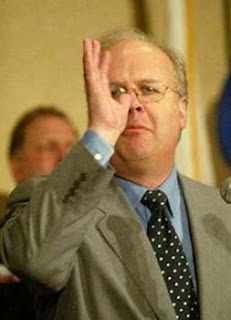 I won’t go into the details of this, as all the bloggers have been on their form today on this subject. Go check out FireDogLake, for example. But this is surprising to me in one way. Given the lengths that Bush and the White House has gone to protect good ol’ Turdblossum, I had expected that Rove would have been there to the bitter end, sort of like the foundation of a falling down old house when it finally collapses. The foundation is still there. That’s what Rove was to the Bush presidency.

I have seen some speculation this morning that the only reason that Rove would “retire” at this point in the game, and only give 18 days notice about it, is that one of several investigations is getting very close to Rove and some nasty revelations are about to be uncovered. I find this a bit unconvincing, as there have been plenty of nasty revelations about this slug of a man so far, and nothing seems to have damaged his relationship with Bush so far. So, the other branch of speculation is that Rove has become so toxic that all Republicans running for office next year, from president down to first term congresscritter, want Rove to be gone so he won’t drag down the chances of the Republican party.

Well, I have news for people who have that line of thinking going. It isn’t going to help. It won’t matter if Rove is still in the White House or not. His specter will still be over every major scandal that has hit the modern Republican party in the last eight years. It has been his hand on the tiller (on everything political that is, Dick Cheney has been driving the terrorist/Iraq war part for just as long), and just because he isn’t currently there isn’t going to change the facts of the matter.

I am really hoping that this is the beginning of the end of the worst assault on the Constitution (both the letter and the spirit of) that this country will ever see. Rove had decided early on in his political career that this country should be in the permanent control of the Republican party, that said Republican party should be able to do anything they wanted to without any need to justify their actions to the population of this country, or, if pressed about it, blame someone else for anything that didn’t go exactly according to his plan, and that the Republican party should do anything they could, both legally and illegally, in order to hold onto power indefinitely.

That, I believe, was Karl Rove’s vision of the future of this country. I, for one, am glad to see that he failed. How what he had planned is any different than, say, the Soviet party in Russia, I do not know.
Posted by zeppo at 9:13 AM