"Leave It To Beaver" as film noir. 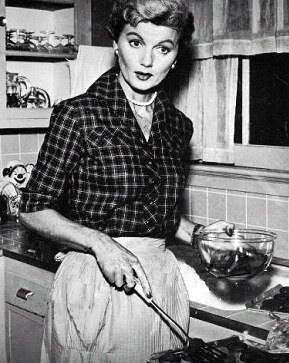 Just for a little variety, here's a post I wrote for another web site quite a number of years ago after watching "The Blue Dahlia" on either TCM or AMC back when it was a decent channel and didn't interrupt movies every 10 minutes for 10 minutes worth of commercials. I thought that Alan Ladd doesn't really play a tough guy very well. Veronica Lake, however... Well, she is another story altogether....

However, seeing Ward in this entirely different role (besides playing second fiddle to John Agar in "The Mole Men", I mean) I was wondering how "Leave It To Beaver" might play as Film Noir.

JUNE (spoken in a sultry voice while leaning against the Fridgedair and smoking a cigarette): Depends on who's asking.

WARD: You're good, Dollface. You're really good. I can't figure what side you're playing in all this. Who are you protecting?

JUNE: Maybe I'm just looking out for myself for a change. How do you like your steak? Well done or.... pink?

WARD: You know very well how I like it, Gorgeous. Soft and tender... Juicy.

BEAVER: Hi Mom, Hi Dad. Gosh Mom, what happened to your dress? That tear goes all the way up the side. You can see your whole leg and everything! You didn't let me go outside last week when *I* ripped my shirt sleeve.

WARD: Well, well... Look what who just blew into town. Didn't your mother teach you t' knock when you come into a room?

BEAVER: Gee Dad, this is the kitchen....

JUNE: Don't start on him, big man. I know about your little urges to knock people smaller than you around. Why don't you try it on me for a change? 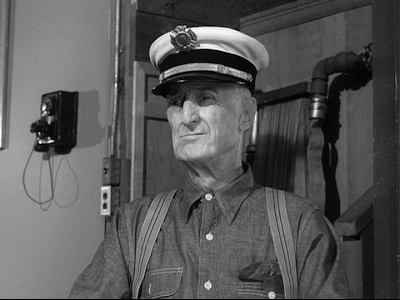 WARD: Dollface, that idea isn't half bad. Right now, though, I have some unfinished business. Kid, where's that brother of yours? I gotta have a discussion with him about a little matter of some dough he calls "allowance".

WARD: Don't give me that old soft shoe, kid. You know something and I want to know what it is, and fast!

BEAVER: Well.... Last night, he said he was going to see Eddie Haskell after school. Please Dad!That's all I know! I swear!

WARD: Haskell! That punk... I should have known it!

JUNE: What's the matter, big man? Worried about someone undercutting your fatherly influences? You make me sick sometimes. I feel an intense desire to go brush my teeth before dinner. I don't want the bad taste in my mouth to spoil the asparagus.

WARD: Knock it off, June! I know where you were going, and it wasn't to get any Pepsodent out of the medicine chest. I don't slave away 6 hours a day, four and a half days a week, just to come home and listen to a lush like you whine and complain about not having enough gin in the house. I should have divorced you when I had the chance....

WARD: Don't pull that "tough guy" routine on me, buster, or you'll find yourself grounded so fast your head will still be spinning next week!

WALLY: Take it easy , old man, take it easy. No reason to get excited…. Me and Eddie here, we just want to have a little talk about some dough that is owed to us. Isn't that right, Eddie?

EDDIE: That's right, Mr. Cleaver. You see, Wally and me, we... we have a big date on Saturday. Yeah, that's it. A big date. And the cost of chocolate malts has gone up considerably, in case you haven't noticed. We just want what is coming to us, that's all.

WARD: Ha, ha, ha! You must be out of practice, Eddie. Is this routine of yours meant to scare people into paying your extortion money? 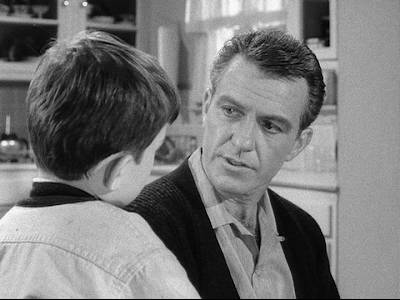 JUNE: Oh, you have a "date", do you Eddie? You have a real short memory these days. *We* were supposed to meet on Saturday. Or have you forgotten?

WARD: June? What is he talking about?

JUNE: Oh, you know how it is... This little man likes playing a big man. He put the move on me. I strung him along to see what it was that he knew. It was like playing a fish on a 10 pound test line.

WARD: Why, I outta kill you as you stand, but June just mopped the linoleum this weekend! Get out! Get out before I bust your ugly mug!

EDDIE: Oh, I'm going, I'm going. I know when I am not wanted. But I'll be back. You can count on it. So long, Wally. Your parents are really a drag, you know? Goodbye, Mrs. Cleaver. You keep on looking good, O.K.? Wouldn't want anything to happen to that pretty face of yours.

WARD: Doesn't anyone around here know how to shut a door without slamming it? Now June, I want to hear all about this! Just what do you know about... fishing?

JUNE: Let go of me, you lunkhead. I've been around the block a few times. I have as much right to know about fishing as the next broad.

WARD: We'll talk about this later. Wally, to your room without your supper! We'll talk later.

WALLY: No one tells me what to do!

WARD: You know something, dollface? You're really something. You handled that magnificently! I guess I ought to trust you more often. Now then, what's for dinner?

JUNE: Glad to hear that I made an impression. As for dinner.... You know how to cook, don't you? All you have to do is put your hands on the little knobs and twist them...

BEAVER: Ah, you guys are gonna kiss again, aren't you? Boy, I hope I never get married.
Posted by zeppo at 9:49 AM