Boeing continues its exodus from Seattle. 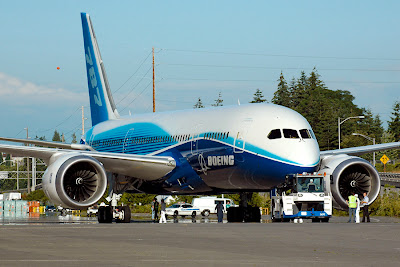 Boeing has just made the decision to set up a second 787 production line in South Carolina. Actually, “just” is not an appropriate use of the word here, because many believe that Boeing management made the decision quite some time ago and was just playing the leverage game with SC to get more favorable terms. They played the same game as many owners of professional sports teams do. They set up a conflict between the current home and some other location that is just lusting after whatever it is. The owners then use the conflict to pull a power play and use their toy as a bargaining chip to see who is going to give them the most favorable terms. Sometimes they stay (like the Seattle Seahawks that almost moved to L.A. and the Seattle Mariners that almost moved to Tampa) and sometimes they go (such as the Seattle Supersonics, that did move to Oklahoma City). Who is going to give the rich owners even more goodies?

But, for Boeing, the die was cast long ago; Boeing was going to South Carolina. Boeing management had had its fill of strikes by the Machinists Union. (SPEEA, the engineering union, went on strike over 10 years ago and it had a significant impact, but by making membership in the union mandatory for all engineers, that union has effectively been neutered. It will not strike again.) It didn’t matter if there were valid grievances or not. They didn’t like the strikes. This follows their move of corporate headquarters to Chicago a number of years ago. Boeing is, without any doubt, no longer one of the fixtures of the Pacific Northwest.

I have absolutely no doubt that whenever Boeing decides to build their next airplane, such as a replacement for the long-in-the-tooth 737, it will also go to South Carolina. Boeing can make a ton of money by selling the land that the 737 plant current sits on, and they can go somewhere where the infrastructure will already exist, complete with a non-unionized work force.

I’m not going to try to do an analysis here. It’s just one more example of huge corporations existing for themselves and their shareholders. They do not exist for the benefit of their workers or their communities. Those things are seen, more often than not, as the enemy. I don’t know why this should be. Why are people who buy stocks in a company more important than the people who put a huge chunk of their lives into it? To me, that’s an astounding business model and one large proof that, in today’s America, the almighty dollar is the only thing that matters.

I could write some major paragraphs about the 787 program itself, which has been an unmitigated disaster for Boeing. It is over two years late and the first airplane still has yet to fly. It is not a coincidence that this is the first major airplane program undertaken by the company after its supposed “merger” with McDonnell Douglas, in which McDonnell Douglas essentially bought Boeing with Boeing’s own money, and, with the exception of Alan Mulally, who is now departed and the CEO of Ford, put in ex-McDonnell Douglas people into upper management. The program has been mishandled from the beginning, and it is because of how Boeing is now run. But yet, moving to South Carolina is seen as being “in the best interests of the company.” The workers who will lose their jobs were not the cause of this fiasco, yet they are the ones that will suffer.

Seattle will survive this blow, and the blow that will come in the future when the 737 replacement is also built somewhere else. The Pacific Northwest is a pretty vibrant area in a lot of different ways. We still have Microsoft, Amazon, Starbucks and some other high-tech businesses. But continued losses such as Washington Mutual (see my earlier post on that subject), major parts of Boeing and the Seattle Supersonics does feel like we are absorbing some major punches in the gut. We are slowly losing what has earlier defined Seattle. Things come, things go, but the quest for the almighty dollar remains.

(Disclaimer: I worked at Boeing for 19 years, before moving on about 9 years ago. I still work in commercial aerospace. Nothing I have said in this post came from any sort of inside knowledge. Everything is readily available from public sources, such as newspapers and the internet.)
Posted by zeppo at 8:40 AM