I've done a little redecorating in preparation for Halloween! 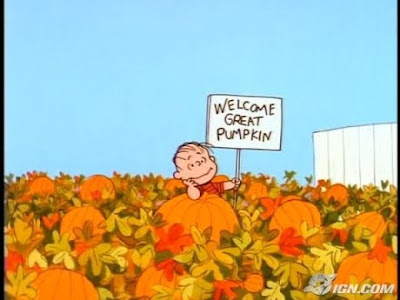 Notice the orange title of the blog? Very inspiring, I thought. Ah, this season is something special indeed. There is a crisp feeling to the air. The leaves are turning colors and falling off the trees to gather in sodden little heaps in the streets that end up clogging all the storm drains. Children are full of anticipation and excitement, waiting for that special day when they get to dress up in cheap plastic costumes from Target and Wal-Mart so they can go out and harass their neighbors into giving them enough sweets to rot the teeth of anyone who even opens the bag full of goodies. Older adults use the holiday as yet another excuse for a "let's get drunk and act just like idiots!" party. Retail stores ring up sale after sale of bags of mini-Snickers and Skittles. Ah, just a joyous feeling!

For me, I like the season because of all the monster and sci-fi flicks that show up on the television. Of course, it isn't as good as back when AMC was actually a good channel that showed classic movies without commercials. TCM is a great channel, but they don't seem to hold monster flicks in very high regard. I will admit to being a fan of the classic horror and sci-fi films. I think I got this from my mother, who was exactly the same way. She would not only let me stay up late to watch King Kong, The Day the Earth Stood Still and Forbidden Planet, she would pretty much insist that I did. My current video collection currently runs over 2100 titles (yes, I freely admit I have no life), many of which are the aforementioned monster, horror and sci-fi. I have your classics, I have your also-rans and I have your so terrible that it peels the paint off the ceiling. My plan for a change of pace, since I am in a huge rut lately, is to write some reviews of some of these films. That takes a special disregard for convention, I think, to write a review about a movie that is 50 to 60 years old that hardly anyone even remembers anymore.

Great Pumpkin from here.
Posted by zeppo at 6:46 AM