Georgia Republicans think that screwing with people’s trust is fine. 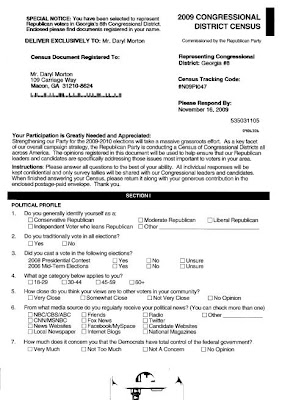 From Thinkprogress. Look at this Republican fundraiser mailing. Seems to look… kind of official, doesn’t it? Sort of like….or exactly like something one might get from the Census. And elderly people that trust stuff they get in the mail, like “You may have won a million dollars!”probably take this to be exactly what it looks like it is. So, would there be ANY reason at all for someone not to take this at face value and fill it out? And maybe put in some money when it asks for it?

Well, except for the part about political affiliation, I guess. That part looks a little suspicious. I love the choices.

You know, there seems to be a few choices left out there.

What’s amazing to me is that people who do this do not seem to realize they are just validating all the ill will that non-ultra-conservative, non-insane people feel about the Republican Party these days. We don't have to prove these people are lying assholes who will do anything to win. They are proving that FOR us, without us having to do anything more than document their asshole-ness.
Posted by zeppo at 1:01 PM