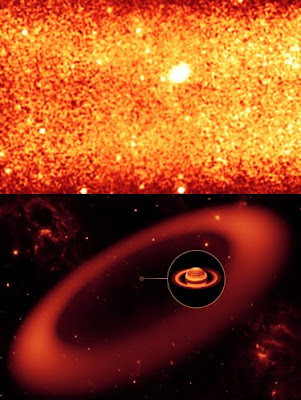 This is from an e-mail I received from an engineering and musician acquaintance. I am not sure of the original source of the material.

The Spitzer Space Telescope has discovered an enormous ring around Saturn -- by far the largest of the giant planet's many rings. The Ball Aerospace-built Multiband Imagaing Photometer captured the infrared image that led to the discovery.

The new belt lies at the far reaches of the Saturnian system, with an orbit tilted 27 degrees from the main ring plane. The bulk of its material starts about six million kilometers (3.7 million miles) away from the planet and extends outward roughly another 12 million kilometers (7.4 million miles). One of Saturn's farthest moons, Phoebe, circles within the newfound ring, and is likely the source of its material.

Saturn's newest halo is thick, too -- its vertical height is about 20 times the diameter of the planet. It would take about one billion Earths stacked together to fill the ring.

That is a huge ring of material. The fact that it is not in the equatorial plane of Saturn makes it very unusual, but also makes the source of the material very easy to deduce.

Update: I wanted to make sure about this before I posted it. Saturn's moon Phoebe is very unusual. It has a highly elliptical orbit, which indicates it may be a captured object and did not condense from the disk of planetary accretion material from which Saturn eventually coalesced. It also has a very unusual makeup. From wiki:

However, images from the Cassini-Huygens space probe indicate that Phoebe's craters show a considerable variation in brightness, which indicate the presence of large quantities of ice below a relatively thin blanket of dark surface deposits some 300 to 500 metres (980 to 1,600 ft) thick. In addition, quantities of carbon dioxide have been detected on the surface, a finding which has never been replicated on an asteroid. It is estimated that Phoebe is about 50% rock, as opposed to the 35% or so that typifies Saturn's inner moons. For these reasons, scientists are coming to believe that Phoebe is in fact a captured Centaur, one of a number of icy planetoids from the Kuiper belt that orbit the Sun between Jupiter and Neptune[13][14]. Phoebe is the first such object to be imaged as anything other than a dot.