I’m at a loss as to what to write about, so I'll trot out a zombie analogy. 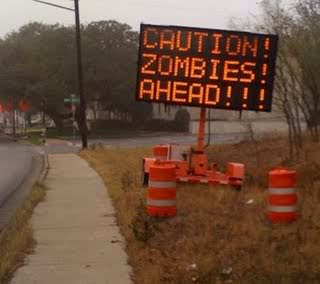 There’s almost no point in making snide comments about the insanity that makes up a great portion of this country. The insane part refuse to admit they are insane, the media refuses to point out that they are insane, the non-insane part keeps trying to negotiate “in good faith” with the insane part, with very predictable results. The insane keep trying to one up themselves, seeing who can be more insane than the last insane person.

If, somehow, the insane people in this country were replaced by zombies overnight, this whole scenario wouldn’t seem much weirder than it does now. Never in my wildest dreams would I have ever considered the possibility of some of the things we are currently seeing. Illogic, hatred and fear rule the day, and all the non-zombies seem powerless to do anything about it.

I imagine that this is not going to end well.
Posted by zeppo at 8:44 AM