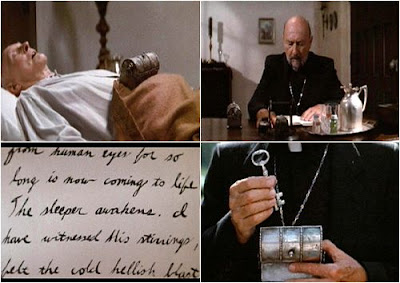 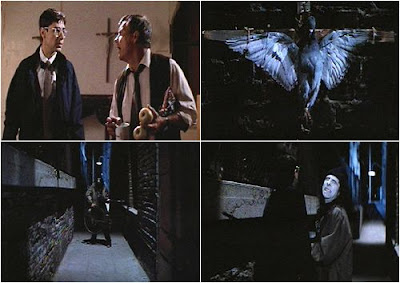 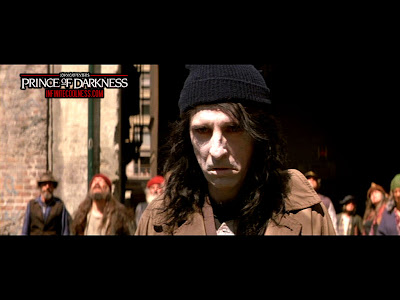 John Carpenter has directed and produced some very noteworthy horror films. His films The Thing, The Fog, Halloween and Escape from NewYork are minor classics of the genre.

I have some mixed feelings about Carpenter’s films. Some of the storyline’s are really kind of suspect, shall we say. The theme and the incidental music throughout, on the other hand, are usually first rate. This film, Prince of Darkness, is no exception. It has some very good points (at least as far as horror films go) and some very medicore points. Prince of Darkness has a great introduction and buildup, but unfortunately, the ending doesn’t really hold up its end of the bargain. Truth be told, it's a little bit on the silly side. However, I am not certain how Carpenter could have really "closed the deal" to make a truly great ending and not overreach.

What I really do like about Carpenter’s films, including this one, is the overall atmosphere and the sense of foreboding that permeates the entire story, from beginning to end. This film has some truly creepy cimeatography going for it. The church in which most of the action takes place is a perfect setting for what is to occur. It’s rundown and neglected. The focus of the camera on such things as a dead bird, swarming ants and cluster of worms and other unknown things on the window help build the suspense. The homeless people just standing around and staring at the church is pretty unsettling. Something is going to happen, you just are not sure what. In that regard, the beginning of this film is actually somewhat similar to some of Hitchcock’s films. The first time you see the film, you are not quite sure what’s going to turn out to be important and what’s not. However, the entire thing blends together to make for a suspensful and atmostpheric buildup. The film is actually enhanced by the fact that the cast, with the exceptions of Donald Pleasance and Victor Wong (veterans of other Carpenter films) and a fanstastic cameo appearance by Alice Cooper, consists of non-stars. It’s difficult to tell who might end up surviving the coming ordeal and who might be “offed” in the first half hour of the film.

This film has been panned by a good number of film critics. As with any movie, what you feel about the film depends greatly about what you expect out of it. If you are looking for a classic, you should stick to something like The Third Man, with Orson Welles and Joseph Cotton. This isn’t going to be it. But if you are looking for nothing more than a creepy little film that entertains for a little under two hours, one that has some genuinely startling moments and isn’t so ridiculous that it ellicits guffaws and knee slaps, then I would recommend finding this one on DVD or putting it on your list at Netflix.
Posted by zeppo at 11:01 AM